Birthed out of the conviction that God's people carry on the commission that was given in Matthew 28:18-20, the Matthew 29 Union (M29) is a student organization or "club" dedicated to fostering an environment at Sattler that is conducive to student growth in disciple-making. What that looks like, more specifically, is identifying their weaknesses in proclaiming the good news of Jesus's kingdom and catalyzing change in those areas. They do this by presenting opportunities to connect to other communities and institutions in the Greater Boston area, providing space to talk through and reflect on hard conversations with unbelievers, and encouraging one another in their walk with Christ (the most important component of all).

The following blog is by members of M29. Stephanie Lawson, a Sattler certificate graduate and former M29 participant is the primary author. Other M29 participants contributed to this post through interviews and the editorial process, namely Anya Miller.

Read on to hear Stephanie talk about witness (one of the Sattler values) and how Sattler and M29 have strengthened her as a witness for Christ. 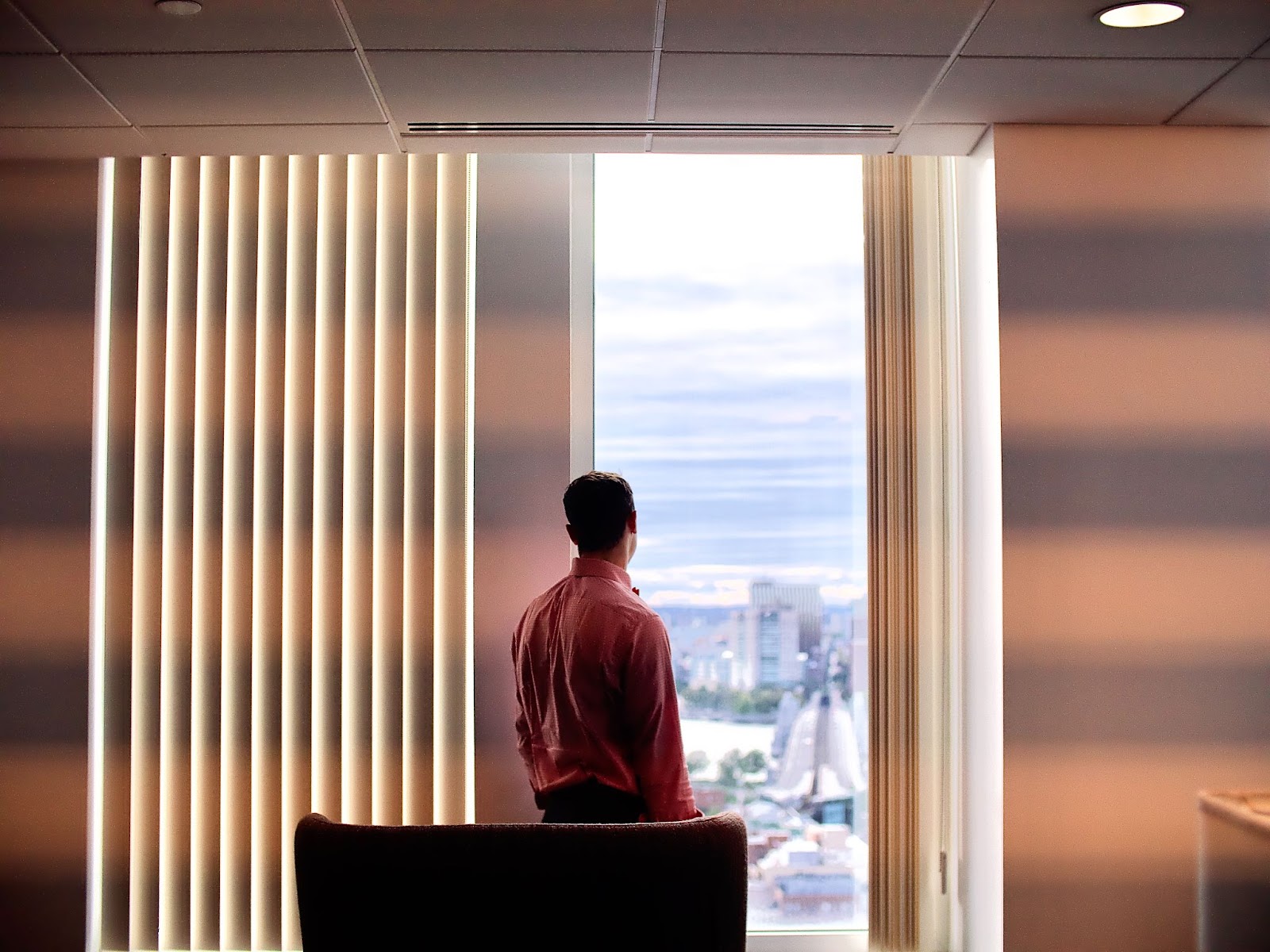 Sattler College has some amazing views from its 17th-floor windows. When standing in front of them it almost feels like you are on top of the clouds gazing down at the busy world below. You can see streets, vehicles, buildings, and people — lots of people. Sometimes they almost look like little ants scurrying about, oblivious to everything around them. Their only focus is the task at hand: constructing their future and ensuring happiness and safety for themselves. Looking at the people far below, it is so easy to forget that every time we see a person, we are getting a glimpse of the image of God. We are seeing a soul that could potentially be lost forever and needs to feel the touch of the gospel in their lives. This realization motivates us to constantly be encouraging one another to not be ashamed but remember and pass on the joy of the good news to others. Encouragement comes through avenues like journey groups, classes, and the Matthew 29 Union: a club devoted to connecting and enabling Sattler students to grow in both their understanding of and motivation to share the good news. Every day students at Sattler are encouraged to claim the title “Witness for Christ” and boldly carry it with them in the streets, in the workplace, and all around the city.

What does it mean to be a witness for Christ? The word “witness” suggests more than merely seeing something. Rather it also holds the idea of active participation. When we say that we are witnesses for Christ, we mean that we have not only seen Christ in the gospel but that we are a part of that gospel — a part of Christ! As a part of Christ, we are now free to do Christ’s work: saving a world that is lost in sin. We are witnesses of a hope that came to a seemingly hopeless world. Witnesses of a hope that is still trying to find refuge in the hearts of mankind. We are the channels God has chosen to use for the sacred duty of saving the souls of humanity. In the Great Commission, Christ commands His followers to,  “Go into all of the world and make disciples of all nations.”  Part of going to all nations starts right where we are in the here and now.

As Christians, we must be willing to move forward and share the gospel with all people in all lands. Perhaps the idea of being a witness scares you? Maybe you feel as if your Bible knowledge is not good enough yet, or that you are too young of a Christian to share the good news. Maybe you are naturally a more quiet person, and feel unsure of how to approach people. Do not let this stop you! I would like to share three areas of focus that we at Sattler have found helpful for reaching people with the good news. Hopefully, they can encourage you in proclaiming the gospel in your home community, too. The three areas are directed questions, storytelling, and intercessory prayer. 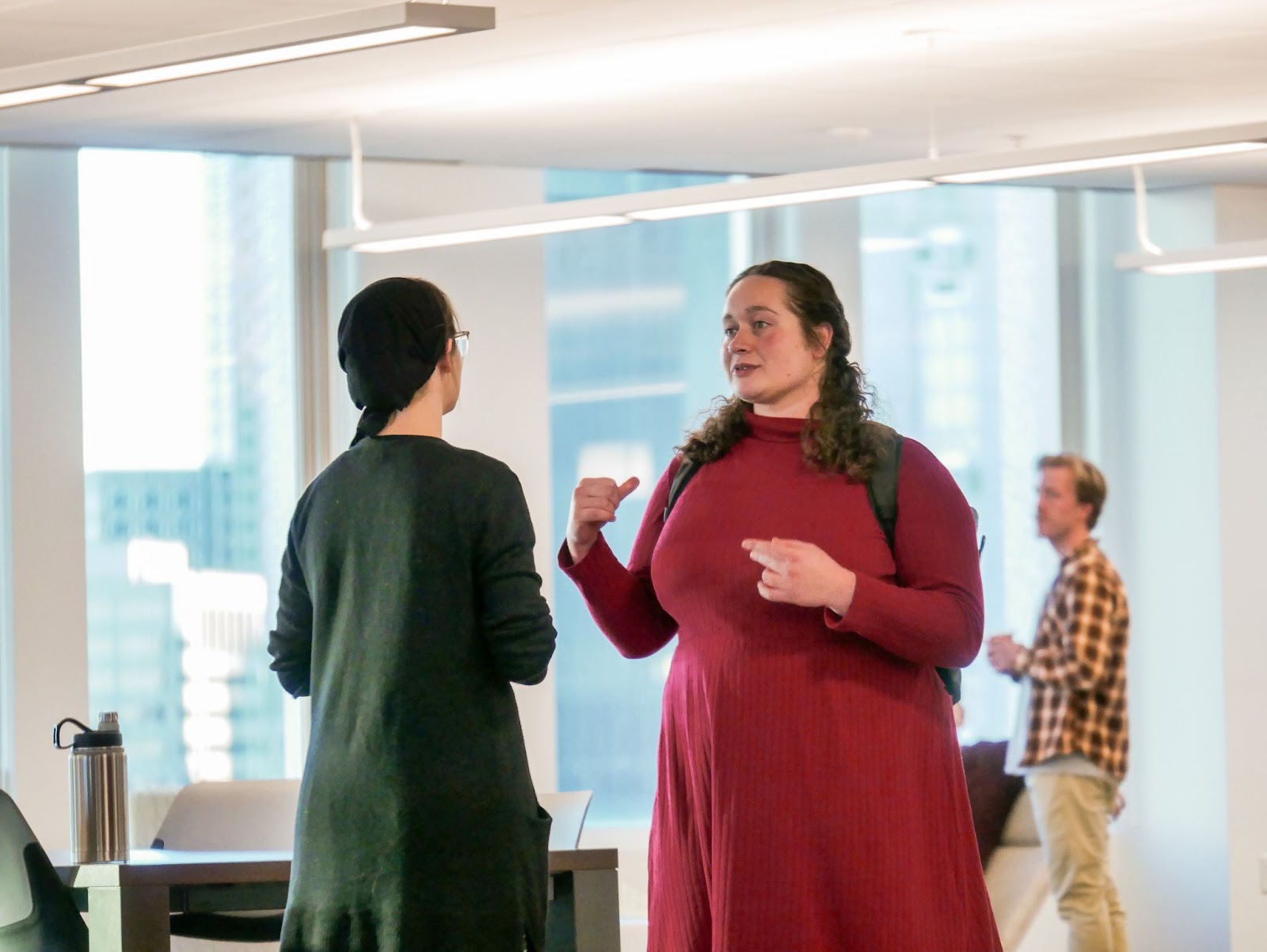 Directed questions are helpful for all conversations about the gospel. When we ask questions it not only makes the person we are speaking with more comfortable, but it also helps us direct the conversation. A well-put question can help to steer the conversation by encouraging people to seriously consider their answers. When questioned further about their beliefs, they are prompted to think deeply and logically about their response. A good question gives you time to engage with what the individual is saying. While they are answering your questions you should be listening and learning. Eventually, the gospel will naturally come forth, and it is usually at that point that your listener is more open to what you have to say. One time another student and I found this tactic invaluable when speaking to a pantheistic man at the Boston Common. This man was very knowledgeable, and talking to him seemed a bit intimidating at first. However, by asking good questions we showed him that not only were we interested in him and his life but also that we were truth-seekers, not just salesmen spreading our ideas. This opened the door for conversation and gave us an opportunity to not just point out the fallacy of his belief, but to let him see it himself. Through engaging him in questions, we were able to plant a seed in his heart that, hopefully, God can continue to cultivate and grow. 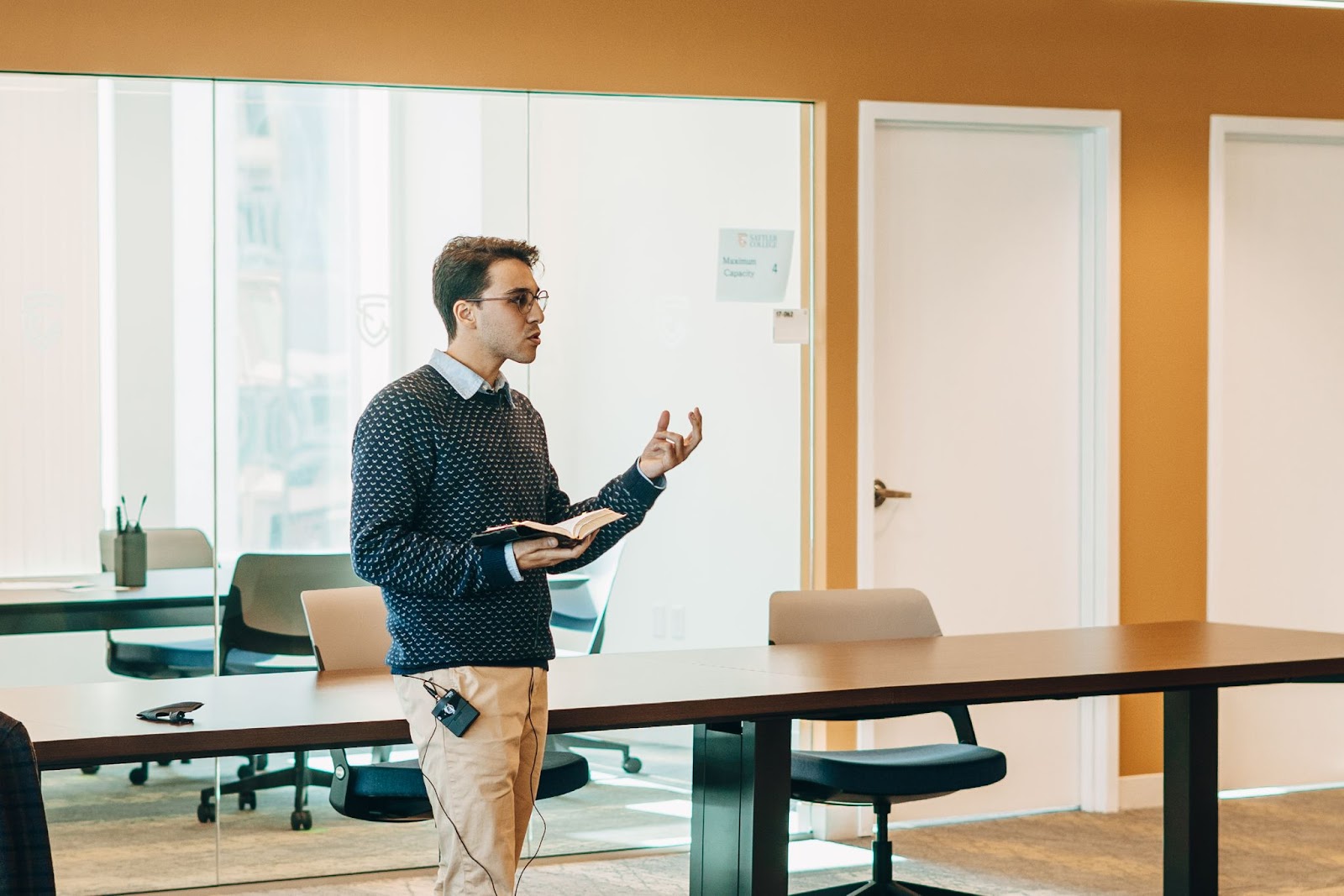 Stories are also a good way to reach people. Everyone loves a good story and often by sharing a story of what God has done in our own lives or the lives of those we know, we open the door to share the gospel. I have found that by just mentioning that I go to church, I can open a door for a conversation about Christianity and Christ’s work in my life. Bible stories are also another good tool for reaching the heart of an unbeliever. A member of Matthew 29 Union recently shared a story about his time working in Greece. Although he was not allowed to share the gospel directly, he would tell the boys in the camp “bedtime stories” from the parables of Jesus. Then he would tell them to think about what the story meant so that they could discuss it before he told them another story. The boys seemed to enjoy this, and it was through this process that he was able to tell them about Jesus while abiding by the rules of the camp. Not only should we engage in storytelling, but we should be attentive story listeners. Everyone has a core story that drives them, and the people to whom you are witnessing are no exception. By learning the stories of their lives and what interests them, we can better know how to touch their hearts. Another student here at Sattler shared about an experience he had while witnessing to an atheistic man. He said that this man tore all of his arguments apart, and left him feeling almost hopeless. After almost giving up, he learned that the man had once been a Christian, but hypocrisy and pain in the church had brought him to the point of rejecting Christ altogether. At that moment he realized that this man was not only relying on logic and science for his argument but also using all the pent-up pain from his past in opposition to the gospel. Had the man’s story been known from the very start of the encounter, the flow of the conversation could have been very different. 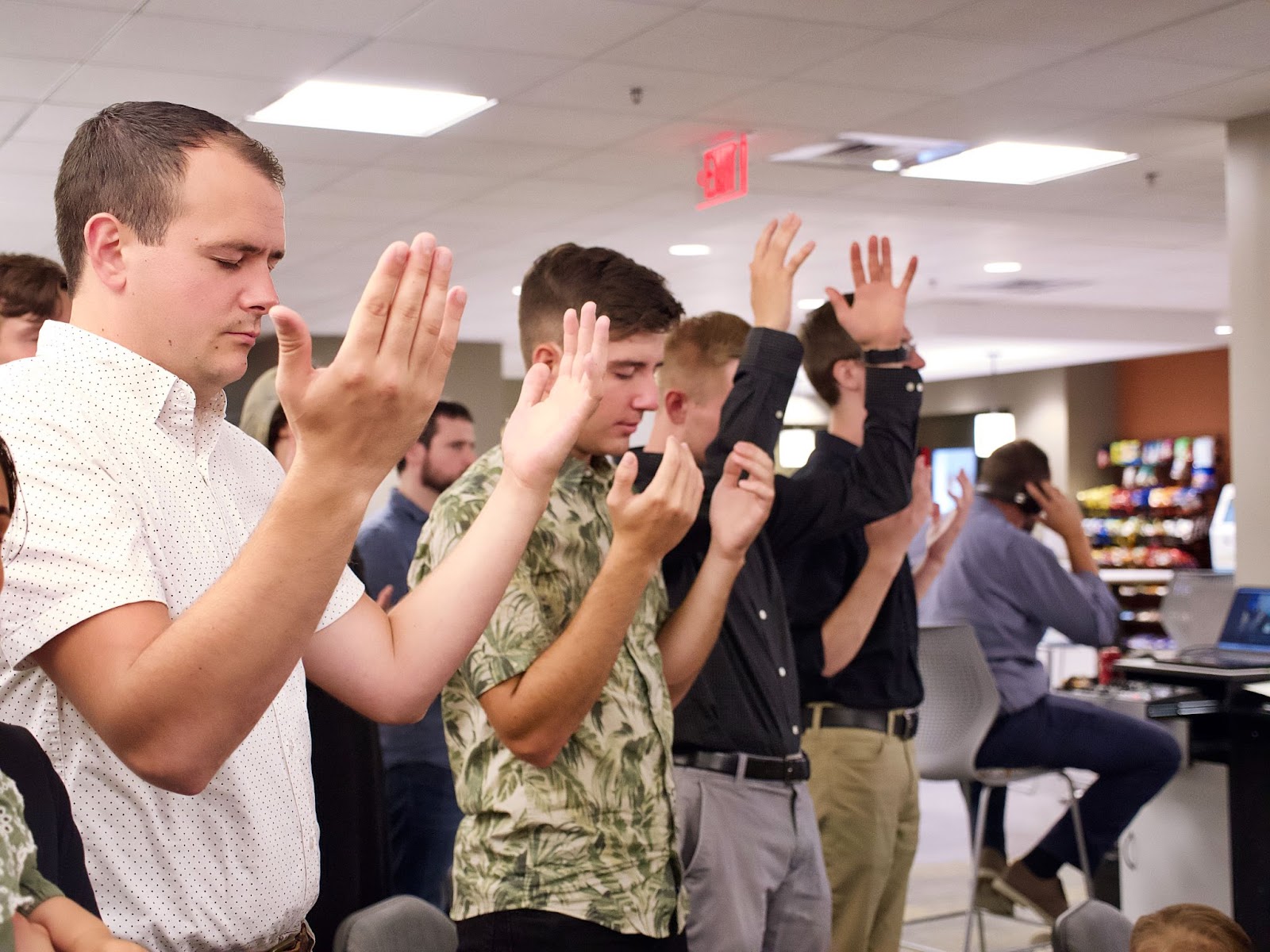 Prayer is one of the most powerful tools that anyone can ever engage in evangelism. When I think of evangelism, one of the first pictures that come to my mind is that of Robert Sheffy. Sheffy was a successful evangelist who devoted his life to prayer. Although he was not good at public speaking, people claimed they could feel the Holy Spirit moving in the midst of the crowd, stirring people's hearts at his revival meetings. A common mistake Christians make in evangelism is relying on their own strength. It is not by our own strength that we lead people to Christ though. By coming before God we can enlist the help of His Spirit, which is the very thing that can lead people to the cross, and the only thing that can change their hearts. Hudson Taylor said, “When we work, we work. When we pray, God works.” When it is our work being done it will always have limits. When it is God doing the work, the possibilities are endless. Recently, I started having meetings with a Chinese woman to help her perfect her English. My ultimate goal was to use this as an opportunity to share the gospel; however, I was afraid that I would be unable to share with her successfully. I reached out to some friends of mine and asked them to pray with me. However, I soon found that I did not need to be worried about how to share the message with her. During our second meeting, she asked me about my faith and wanted to hear the gospel story herself. I was so amazed at how God had worked everything out behind the scenes! I was worried about my performance, and He showed me that it is not about my work. Rather, it is about His work. Now, I am having Bible studies with this woman once a week, and God keeps showing me time and time again that it is Him, not me, who is making the difference in her life.

Evangelism is a skill that must be acquired over time. No one ever said it was going to be easy! It has many setbacks, often involves rejection and humiliation, and is sometimes emotionally exhausting. However, as we often say at Sattler, “God does not call the qualified, but He qualifies the called.”1 Let’s tap into the power of His Spirit and seize the opportunities that He gives to us. He is right behind us giving us strength, and with the Creator of the universe on our side we are capable of all things. May we all go forth into the world and be faithful witnesses for Christ!

“You are my witnesses,” declares the LORD, “and my servant whom I have chosen, that you may know and believe me and understand that I am He. Before me no god was formed, nor shall there be any after me” (Isaiah 43:10, ESV).